June 14, 2015. Because it was Sunday, the trip to the hospital was a stop en route to church. Because we attend the late service, Mom, Chris, and I arrived a little later than usual to visit with Dad. Dad’s nurse, Erin, was new for us. We learned that she usually worked in the Medical ICU (MICU) with another favorite MICU nurse, Drew. We were developing a real respect for the nurses in the south tower.

Dad’s vitals weren’t stellar, and his WBC count was up to 14,000. Although he had breathed on his own during the night, he was now back on CPAP and seemed to be struggling to breathe, although his oxygen saturation was still at 95%. Dr. Sanchez thought that maybe Dad’s WBC count was elevated because of his strenuous breathing, or perhaps because of the infection and fluid in his lungs. I’m not a doctor, but I suspected that the infection was the culprit.

For the past 38 days, Dad had had a variety of goals having to do with strength and infection levels, and the like, but now the goals were starting to change. The hospital staff was intent on moving him out of CTICU, but his respiratory condition prevented him from moving to a different floor. Instead, he needed to move to a continuing-care hospital. However, before he could transfer, he had to reach some specific benchmarks. Among other things, he had to be able to withstand the four-hour dialysis sessions and his hemoglobin levels needed to stabilize. To reduce the risk of infection, the doctor also ordered the changeout of Dad’s central line and he removed the A-line from Dad’s right hand. Dr. Sanchez also wanted Dad to breathe on his own until 8:00 P.M. To enable that goal, my father received some pretty aggressive respiratory treatment, which was followed by him coughing up of a lot of thick secretions.

When we arrived at the hospital on Monday, June 15, Dad was upset because the Yankauer (yonker) wand was missing from his suction line. When you’re recovering from pneumonia, expelling secretions from your lungs is a big deal. In addition, the trach tube made it more difficult to handle the normal secretions that build up in the throat. The nurses would tell him to use the call button when he needed assistance, but when he used it, you’d hear, “Yes? What do you need?” Uh; he couldn’t speak, so when he was alone, he had to wait until someone happened by.

Dad’s WBC count had dropped to 11,900, but he was having pain around his chest wound. His hemoglobin had also dropped again, which puzzled the doctor. It seemed like he was losing blood, but they couldn’t determine a clear source. To rule out a bleeding ulcer, Dr. Sanchez ordered an esophagogastroduodenoscopy, but it didn’t identify any evidence of bleeding in his stomach. On the flip side, Dad’s oxygen saturation and MAP remained good all day.

Among the entourage of doctors, pharmacists, residents, and fellows was the case manager, Laura, and she started becoming a more visible participant. She brought us literature about the Scott & White Continuing Care Hospital (CCH) and encouraged us to stop by and visit with April, the CCH nurse manager.

During the afternoon, Svenja, the Trach Goddess of Scott & White, stopped by and downsized Dad’s tracheostomy tube. She discovered that the current tube was stuck, and she had a little difficulty removing it. Fortunately, removing the tube drew only a small amount of blood, and the new tube was inserted quickly and without any difficulty. The new tube had numerous benefits: it had a smaller outer diameter, a larger inner diameter, and could accommodate the Passy-Muir speaking valve. When Svenja attached the speaking valve to the tube, Dad’s voice was strong and clear. Dad had been unable to speak since the morning of June 8. Even the nurses were thrilled to hear him speak again.

As much as he was pleased to talk, he was equally disappointed when the nurse removed the speaking valve. Besides his not being able to sleep with the speaking valve in place, the valve also had to be removed whenever he received any sort of oxygen support.

My cousin and I stayed at home after lunch that Monday. While Chris gardened and I worked from my parents’ office, my mother returned to the hospital; however, she came home early. She didn’t think that my father looked well and she wanted me to return to the hospital with her. When we arrived, his room was empty. Dad had been moved to IR, where they inserted another tube in his right chest. Because they took him without signed consent, we were escorted through the back hallways and elevators to the IR department so that Mom could take care of the paperwork. Dad finally returned to his room shortly before 6:00 P.M. Dr. Sanchez said that they’d probably have to tPA this chest tube, too. On the trip back to the hospital after dinner, we had stopped to admire a rainbow. It had seemed like such a hopeful sight. I guess we take our signs where we can find them. 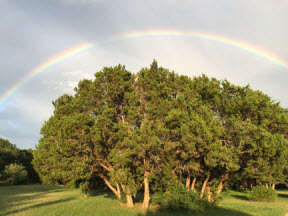 Tuesday, June 16, was another day of mixed news. Dad was talking and his WBC count was down to 8,300—a normal reading. The speech therapist, Holly, stopped by and administered a bedside swallow study—the first since he received the tracheotomy tube. Unfortunately, he failed it miserably. He coughed up pretty much all of the liquids. Holly gave us some very large, lemony Q-Tip-looking thingies to swab the back of his throat. Although just thinking about it makes you want to gag, it was supposed to stimulate swallowing. This therapy was to be repeated about five times daily.

We still hadn’t seen the doctor when we left for lunch at 11:15 A.M., but we needed to leave. Chris, my cousin who had been visiting for the past week, was leaving at 12:30 P.M. to return to Phoenix. The airport is about 60 miles from my parents’ house, so we were fortunate that Chris was able to hire a limousine service to transport her. Then, Mom and I were home again, alone.

When we finally saw the doctor at 3:45 P.M., he tPAed Dad, which eventually released another 400 ml of fluid from my father’s chest. Before we left for the night, I swabbed the back of Dad’s throat with the lemon swabs. Dr. Sanchez told me and Mom that Dad’s transfer to the continuing-care hospital was imminent and to visit the continuing-care hospital the next day. At this point, we’d become weary of this place and were anxious to leave and were anxious to visit Dad’s new digs.

On Wednesday, June 17, Mom and I held our breath as we entered the hospital. It was hot outside, the parking lot was misery, and we really never knew what to expect when we got to Dad’s room. On this day, Dad’s WBC count had inched up to 11,500.

Much of our time that day was spent talking with Laura, the case manager, about moving Dad. We had many questions about payment and Medicare benefits. After Mom ran some errands, I picked her up at 11:30 A.M., and the two of us met with April, the nurse manager at the CCH. She seemed very pleasant, and we felt like this would be a good place for Dad to recover before heading home.

I worked from the house for the rest of the day, and Mom stayed with Dad. Dr. Sanchez told Mom that the X-ray showed that the chest tube and tPA had done their job. He also said that on the following day, Dad would have his chest tube removed and the dialysis catheter replaced to reduce the risk of infection. If all went well, he’d receive typical dialysis and be transferred to the CCH later in the day.