It’s June 5, 2015. Mom and I arrived at the hospital at 8:45 A.M. We’d had three good days and were hoping for the ever elusive fourth good day. Because it was Friday, we were greeted with a new set of doctors. Dr. Velazco returned as the pulmonologist and Dr. Issac was the nephrologist. We hadn’t been in the room long when I started feeling a little anxious about our four good days. In addition to Dad’s WBC count being up by 3000 points from the previous day, he sounded somewhat congested. He coughed throughout the day, but seemed unable to expel any of the secretions from his lungs.

The dreaded dialysis machine returned and removed approximately 2400ml of fluid during the eight-hour session. We had been told that the dialysis was a temporary procedure so that his kidneys could “rest,” but we wondered how much rest they needed. Holly tried to see Dad for swallow therapy, but he was asleep and could not be roused.

The respiratory therapist gave Dad a breathing treatment, which seemed to provide him with some small amount of relief. When Mom and I left at 4:00 P.M., Dad was still sleeping.

Stan’s late arrival into town caused us to run behind schedule, so we didn’t return to the hospital until 7:30 P.M., well after the shift change.  His night nurse, Carolina, entered his room—her first time seeing him that evening.

Dad appeared weak and it seemed to me that he was struggling to breathe. Carolina spent a considerable amount of time suctioning him and getting him cleaned up for the night. He seemed a lot better when we left, but this didn’t really feel like a good day.

My good-day counter remained at 3.

Because it was Saturday, I slept in until 6:45 A.M. I usually slept with my phone on the nightstand, but I had inadvertently left it in the family room the previous night. I retrieved the phone and noticed that I had missed a call from Scott & White at 5:14 A.M. In a panic, I called the hospital and Kelli, the charge nurse answered. She told me that at 3:00 A.M., they had had to intubate my father. Evidently, he went into hypercapneic respiratory failure. Fortunately it was an emergency situation, so they didn’t need to obtain consent from someone separated from her phone. They also reinserted an arterial line in his right arm. In addition to all this good news, his WBC count had elevated to 15,000, which meant that yesterday’s elevation really was the beginning of the end of our good-day stretch.

When we met with Dr. Velazco that morning, he said that he would perform a bronchoscopy so that he could see what was happening in Dad’s lungs. They would also collect secretion samples. Knowing more about the infection in his lungs would help them target the infection with the correct antibiotics.

Mom and I left the hospital during the bronchoscopy. Because Dad was fully ventilated, the process was somewhat simpler, with the possibility of fewer complications. The rains that had started a couple of weeks earlier had finally stopped, and the daily temperatures were beginning to rise. When we stopped by the house, Stan was braving the heat to mow the lawn.

When we returned to the hospital after lunch, Dr. Velazco told us that he had removed a lot of “chunky” secretions from Dad’s lungs. Dr. Velazco was from Peru, was soft spoken and spoke with an accent that my parents couldn’t understand, but I really liked him. He took time to explain my father’s situation and often skipped the $20 technical terms for the easy-to-understand 5-cent words. The removal of this “chunky” matter improved Dad’s oxygen saturation levels, which zoomed from the worrisome 80s to 100%.

Somewhere around 2:00 P.M., I received a text message from a phone number that I didn’t recognize. The message said that there was a birthday hug waiting for me in the ICU waiting room. The mystery texter turned out to be my long-time friend, Susie. She had been in Dallas (a three-hour drive from Temple), and thought that she’d stop by to say hello. 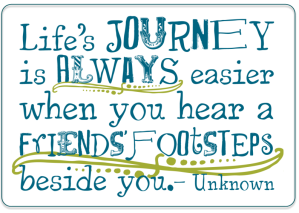 Susie’s appearance in the waiting room was just one example of the random acts of kindness that my mother and I received during my father’s ordeal. I still marvel at our good fortune to have been blessed with such wonderful selfless friends. The neighbors seemed to instinctively know when we needed a meal, some cookies, or a hug. My friend Rhoda gave up a week of her time in Wisconsin to help when Mom had her stoke, and in three days, my cousin Chris would be arriving from Phoenix to help out for a week.

Although I loved their support, I never stopped hoping that I wouldn’t need it much longer.

Today was Dad’s one-month anniversary in the hospital, and the good-day counter had been reset to 0.