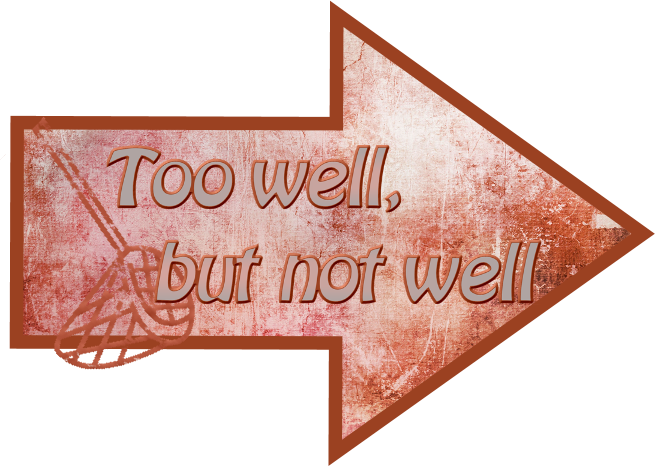 January 26, 2016. Because it was Tuesday and a dialysis day, everyone in the house was awake and up by 4:00 A.M. Dad and Dianne zipped through their morning routine, and they were ready and waiting for the HOP bus when it arrived at 5:45 A.M. Dad’s dialysis session started at 6:00 A.M. and was finished by 10:15 A.M. When he checked in, he weighed 66.6 kg, and when he left, his weight was down to 65.4 kg, so they removed only a minimal amount of fluid.

Unfortunately, finishing dialysis early doesn’t necessarily mean that you can leave early. Dianne and Dad had a bit of a wait for a bus that would take them back home. When they arrived home at 11:30 A.M., Dad wasn’t feeling very well and wanted to take a nap. We had a quick lunch so that he could start his nap at 12:15 P.M.

At 1:20 P.M., he started to get out of bed because he needed to vomit. We quickly unhooked him from the tube feed so that we could help him get out of the bed. He vomited a couple of times, but only mucus. He still wasn’t feeling too perky and wanted to lie down for a few more minutes. Because of his nausea, we did not restart the tube feed.

We had been anticipating the arrival of a nurse to reevaluate Dad for another 60 days of skilled nursing. A nurse that we had not met before arrived at 2:00 P.M. for the recertification visit. Instead of being approved for the additional time, she said that Dad was too healthy and that she would not recommend further skilled nursing support. Instead, we would be permitted three calls to the Home Care office during the next 60 days. I suddenly felt like I was dancing on a tightrope and my safety net had just been removed.

After the nurse left, Dad got up for a few minutes to have some shaved ice, but soon wanted to lie down again. He got back up again a few minutes before 5:00 P.M. to join us in the sunroom for happy hour. After chatting for a few minutes, he wheeled himself to the hall closet. Moments later, we heard a loud crash, and Dad was on the floor and on his back. We all ran to him to see what had happened. Apparently, while standing in front of the unlocked wheelchair, he got his feet tangled up in the small front wheels and lost his footing. Fortunately, his fall to the floor was somewhat akin to a bouncing pinball, so he didn’t fall straight to the floor. He did land on his head, however, and it was bleeding. After helping him back into his wheelchair, we gave him a cold compress for the goose egg that was quickly developing on the back of his head. The bleeding seemed to stop, and he wanted to return to the sunroom to watch the news. 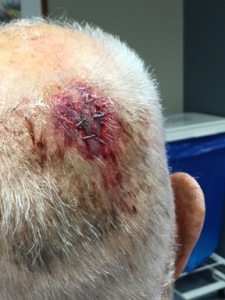 When the news was over, Mom noticed that the bleeding had restarted. After careful examination, it seemed that additional swelling had caused little cuts to open and bleed. I used one of my three lifeline calls to Leo, the after-hours nurse. He encouraged us to take Dad to the emergency room to ensure that he was OK. I had often said that I would never take Dad back to the Scott & White emergency room unless he was bleeding profusely, so I guess that this situation qualified as ER-worthy.

Mom, Dad, and I left home for the emergency room at 6:30 P.M. After three hours, a CT scan, four staples in his head, and a tetanus shot, we were on the way back home. The arrival home was pretty exciting when he practically fell on the garage floor as he transferred out of the car.

Dianne ate dinner while we were gone, but when we got home at 10:00 P.M., we ate beans and franks and pumpkin cookies. Dad’s dinner didn’t stay with him very long. Within a few minutes, he had vomited his dinner and cookies. I wished that someone could shed some light as to why Dad kept being nauseated.

We finally got him to bed at 10:30 P.M. We decided to restart the tube feed but restricted the flow to 25 ml/hour. Shortly before 11:00 P.M., the lights were out downstairs, and I was heading to bed.

January 27.  Dad had a restless night’s sleep, but he and Dianne slept in until almost 7:00 A.M. I didn’t have any early morning meetings and was able to sleep in until 4:45 A.M. It wasn’t close to a full night’s sleep, but after our late night at the ER, it was better than getting up at my usual 3:30 A.M.

When Brenda stopped in for Dad’s physical therapy session, she was relieved to learn that Dad’s fall wasn’t caused by balance issues and that it was no worse than it was. Dad said that he felt fine and didn’t have any pain, so she concentrated on exercises that would improve his balance.

Shortly after Michell arrived at 10:30 A.M., I emailed Becky, the owner of One On One Personal Home Care Services, and informed her that we would be ending our services with her company on February 17. I also asked her to let us tell Michell. We had become fond of her and we wanted her to hear the news from us.

While Dad was in the hospital, the lock on our front door had quit working. With a little assistance from Michell, Dad switched the front-door lock with one that was never used. After six months of not having access to the house from the front door when it was locked, it was nice to have it working again.

When Kristen arrived today for Dad’s swallow therapy session, we had a tea party of pumpkin cookies and tea. She wanted to see how Dad handled thin liquids and food. He did pretty well, and Kristen presented us with a lesson in anatomy. I still marvel at how any of us can swallow food without choking.

In response to an email message that I had sent to Dr. Pfanner’s office about Dad’s frequent vomiting, I received a phone call from Julie, Dr. Pfanner’s dietitian. She didn’t provide any insight as to why Dad kept vomiting, but she said that we should increase Dad’s fluid intake. She thought that he should drink at least a liter each day, which was in direct conflict with the guidance from the nephrologist’s dietitian, who said that he needed to restrict his fluid intake. Sometimes I felt like the pushmi-pullyu.

Shortly before happy hour, I changed Dad’s trach. I was a little alarmed at the sight of it. I couldn’t tell if it was coated with mucus and food or mucus and blood. I took a photo of the nasty mess and texted it to Kristen. Kristen responded right away and said that she thought that it looked more like blood than food. I hadn’t stopped to think about how shocking it might have been to receive such a yucky image on her phone. I quickly sent the photo in an email message to Svenja, the trach nurse at Scott & White, but I suspected that I wouldn’t hear back from her today.

We were able to enjoy dinner and a game of cards tonight without any interruptions from vomiting. Dad was on his game tonight and beat us at cards. By 7:30 P.M., we had finished our card game and were starting our nighttime routine.

January 28. Dad and Michell had a good night’s sleep and were up at 4:00 A.M. I had started work earlier than usual today so that I could head back to Houston for a couple of days. Fortunately, Dad and Michell were ready a bit earlier than usual, because the HOP bus pulled in our driveway at 5:30 A.M. to take them to dialysis. I appreciated the fact that they tried to ensure that Dad was not late to dialysis, but 5:30 A.M. seemed a bit early for a 7:00 A.M. appointment.

As I was packing up my computer at 11:45 A.M., Dad and Michell returned home. Because they had returned home when they did, the four of us were able to eat lunch together before I left at 12:30 P.M.  These drives to Houston were exhausting, and I usually battled drowsiness about 20 miles from home. Stan had told me that he had often stayed awake by eating M&Ms, so I starting chasing them with coffee somewhere around Brenham, Texas. As soon as I arrived home, I napped for about 30 minutes and then drove to my night class at Glassell School of Art.

While I was driving home to Houston today, Dad took a nap to recover from his dialysis session. After he woke up, he and Michell went to the garage with Mom to check out a problem that she was having with her car.

During happy hour, Dad had a Sprite, which is considered a thickened liquid, but within a few minutes, he was sick to his stomach again. He wanted to lie down and skip dinner. He had planned to watch a presidential debate with Mom, but he wasn’t feeling well enough to get out of bed to join her. Michell helped him to get ready for bed, and he was asleep by 8:00 P.M.

January 29. I had not been to my Houston office in many weeks, but one of the reasons why I had to come home this weekend was so that I could clean out my cubicle to prepare for an office move. After filling up the trash and recycling receptacles in my cube, I started swiping them from all of the surrounding cubicles. When I left for the day, my cube was ready for the move, and my car was full of personal items that would not fit within the new space.

Back in Temple, Dad was having a mixed day. Shortly after he woke up at 5:00 A.M., he started vomiting again. He rested a bit and took his time getting dressed. By 6:30 A.M., he was feeling up to eating his usual breakfast of Cream of Wheat and peaches. Michell had waited until after he ate breakfast to administer his morning meds and trach care. When she was finished with his morning routine, she resumed the tube feed at the slower 50 ml/hour rate.

Shortly before 10:00 A.M., Dad had about ½ cup of yogurt and then told Michell that he wanted to go back to bed. As they were discussing his early nap, they decided to play a game of cribbage instead. Dad had taught Michell how to play a few weeks earlier. She was no substitute for Stan, but I was glad that she was able to distract him from taking another nap.

Janet arrived just before 11:30 A.M. for Dad’s occupational therapy session. Regardless of how bad Dad felt, he always seemed to perk up somewhat during their verbal sparring. I was pretty sure that their banter also distracted him from the exercises.

After Janet left, Dad had a light lunch of ham and cheese and a cup of nectar. Michell was able to get him to practice some of his balance exercises at the sink, and then they walked outside for a few minutes. He then spent the remainder of the afternoon napping.

During happy hour, Dad had some shaved ice. Somehow, Dad had convinced Mom to prepare flounder and beets for him for dinner—a less-than-favorite combination for her. The thought of this missed meal made me want to reach for a Zofran. While Stan and I enjoyed an evening at TUTS watching The Bridges of Madison County, Dad, Michell, and Mom ate ice cream and played Oh Hell, and Mom won.

One thought on “The second fall, and this time without a safety net!”