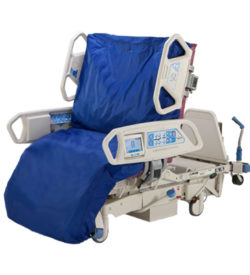 August 3, 2015. It had now been 90 days since Dad first entered the hospital for his seven-to-ten day stay. When Mom and I arrived at 7:45 A.M., Dad’s room was a hubbub of activity. Dr. Phan, the nephrology resident, was assessing him and Emily, his nurse, was exercising his arms and legs. But the first thing that we noticed was Dad’s bed. Yesterday, Dr. Jimenez had told Dad’s nurse that he wanted to see Dad’s bed raised to a more upright position. I had envisioned that the angle of his bed would change from 30 to 75 degrees. What we saw instead was a bed that had morphed into a chair. It played music, automatically adjusted to specific angles, and could change into a chair. Was there anything that this bed couldn’t do?

Emily greeted us with a mixed bag of information. She told us that Dad had been off all of his vasopressors since 1:30 A.M. and that Dad had squeezed the doctor’s hand this morning in response to a verbal command. On top of that good news, the respiratory therapist had switched over his ventilator to CPAP, so Dad was now breathing on his own. I would have been over the moon, except his WBC count was now 19.7, which was up from 18.0. I was obsessed with his WBC count and noticed that it had been inching up for the past two days.

Under normal circumstances, the attending physician starts on Friday; however, life at the hospital had been anything but normal. Two weeks earlier, the director of the Medical ICU died in a freak accident at his home in Salado. Aside from the loss of an extremely well-liked coworker, the doctors’ schedules were shuffled to fill the administrative duties left by his passing. This shuffling of schedules resulted in the early departure of Dr. Jimenez and the early arrival of Dr. Yau as the new attending physician.

Dr. Yau said that he would order a CT scan to see if Dad had an infection outside of his lungs that could be drained, which would help lower Dad’s WBC count. On a more positive note, he said that it seemed that Dad’s kidneys had finally decided to wake up and start making urine. The day seemed to be going better than I could have expected. I hated to leave, but I had to return to my parents’ house to attend a noon meeting for work.

Shortly after I got home, my day started taking a downward turn when the internet service stopped working. With the internet being my primary connection to my job, I didn’t accomplish much for the remainder of the day.

Things weren’t going much better in my father’s room. From what my mother observed, Dad would not stop pulling on his feeding tube, CPAP connector, and trach tube. Mom was also upset because it seemed to her that Dad didn’t recognize (or acknowledge) her. Even worse, he seemed to regard her with some contempt, although he seemed pretty happy when the nurse was in the room. Because he was unable to communicate with us, we were very confused about his behavior and what he was thinking.

While Mom and I were at home for dinner, I printed out some recent photos of Dad with the family. I wanted the hospital personnel to see him as more than the sick man that they attended in that hospital bed. He hadn’t entered the hospital as some sickly old man, and I wanted them to have a sense of who he was just a few months earlier. After dinner, Mom and I returned to the hospital around 6:50 P.M. and learned that Dustin was Dad’s nurse. I wasn’t impressed with this nurse, and I wasn’t thrilled to see him again.

Dad seemed agitated again. In an attempt to calm him, I held his hand and talked to him for about an hour. He seemed to be calming down when the respiratory therapist stopped by to administer the oral treatment, but as soon as she left, Dad vomited. With his history of aspiration, I was a little freaked out. I quickly grabbed a nurse in the hall, and she got Dustin, who was seated at the nurses’ station. I wondered if he had been agitated because he felt nauseated. I’d never know.

After contacting the on-call resident, they decided to stop Dad’s tube feed for the remainder of the night. The doctor also ordered an x-ray and the nurse pulled out all the remaining fluid in Dad’s stomach. It seemed disgusting, but with the feeding tube, the nurse could use a syringe to withdraw the Nepro in his stomach. They occasionally suctioned his stomach contents to see how fast the tube feed was being absorbed by his system, and then they’d return the Nepro into his stomach. Something that once might have seemed pretty disgusting now was part of our daily routine.

At 8:25 P.M., Dustin and another nurse repositioned Dad and adjusted the back of his bed to a 45-degree angle. Tube feed-patients were usually kept at a 30-degree angle, so Dad was now a bit more elevated than usual.

As Mom and I were leaving for the night, Dustin told us that they would x-ray Dad sometime around 3:00 A.M tomorrow morning to see if he had aspirated anything when he vomited.

In addition to 90 days being a long hospital stay, it also marked the end of his annual insured Medicare days. From this point forward, he’d be drawing against his one-time reserve of 60 days. Surely he’d be home in less than 60 days.

August 4. Mom and I arrived to Dad’s room at 7:45 A.M. Dr. Brett Ambroson, one of the residents, was assessing Dad.  He provided us with a brief update about the CT scan and x-ray, assuring us that Dad had not aspirated the Nepro last night. He also confirmed that Dad was still off all of the vasopressors. Shortly after Dr. Ambroson left, Dr. Adam Hayek, one of our favorite fellows, stopped by to see if we had any questions. While he was in the room, Dr. Hayak mentioned that Dad had vomited again during the night, so until the doctor stopped by on his rounds, the tube feed would be withheld.

For the first time since his readmittance to the hospital, Dad motioned for me to give him a kiss, and he smiled at me.

At 11:00 A.M, Travis, the physical therapist, stopped by to see if he could get Dad into a cardiac chair. Travis couldn’t find a cardiac chair, so he tried to get Dad to the side of the bed. Dad was pretty weak, and Travis had one heck of a time moving Dad. Fortunately, Heather, another physical therapist, stopped in to help him. Dad didn’t actually sit on the side of the bed, but they established a baseline of Dad’s strength. Travis said that he’d try to find a cardiac chair for Dad later in the day. I didn’t know what a cardiac chair was, but if Dad could barely sit on the site of the bed, I didn’t understand how he could get into a chair.

Just before we left for lunch, Pastor Don stopped by for a short visit and a much-needed prayer. Although Dad had seemed happy to see us, I wasn’t feeling as positive this morning about his status as I had been just 24 hours earlier. Although Dad’s condition was no longer grave, it was guarded, which diminished my anxiety only slightly.

As mom walked back into Dad’s room after lunch, Dad was pulling out his feeding tube again. Mom alerted Chris, the charge nurse, who secured the tube with a little tape and some glue.

Dr. Howell stopped by and said that the antibiotic that Dad was taking was very strong and that they wanted to hold it in reserve and not use it unless absolutely necessary. He added that it could take as much as four weeks to clear up the infection. Four weeks. That was over half of our remaining Medicare coverage time. I wondered if Dad would have to remain in the hospital until the infection was gone. His WBC count had inched up again overnight, and I was becoming more anxious about this infection.

At 3:30 P.M., the nurse gave Dad some Zofran for nausea, and told us that the tube feed would resume later that evening.

I had been at home working since lunchtime and returned to the hospital at 6:30 P.M. Sarah, the night nurse, came in at 7:05 A.M. to perform her evening assessment. Dad didn’t respond well to her commands, but I had a sense that he could if he wanted to. He was very frustrated and it seemed to me that he was losing his will. I talked to him for a long time, but I didn’t think that I made much progress with him.

Since Dad had become aware of his surroundings, we had talked to him about what was going on around him and the state of his health, but we had not told him what had happened to him at the CCH. For him, it probably seemed like one minute he was in dialysis and the next minute he was waking up in the hospital, hooked up to machines and unable to communicate. Stan, Mom, and I agreed that we should tell him what happened. Maybe tomorrow.