On May 26, 2015, we woke to the news that Houston had received more than 10 inches of rain overnight. Fortunately, Stan arrived back at our home in Houston before the rain started. It wasn’t a great homecoming, however. Our flea infestation drove him from our house to our garage apartment. The local flooding forced Stan to work from home the next day. Before starting work, he researched ways in which he could rid our home of fleas. 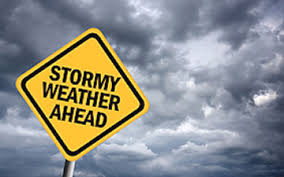 Meanwhile, back in Temple, the doctors told my father during their morning rounds to drink a lot of liquids during the day. We set a goal of 3000 ml, but his consumption fell far short of that goal. I had thought that I could get my father to consume some liquids if I offered him something he really liked. Unfortunately, I couldn’t get him to drink a strawberry milkshake, which was a favorite beverage of his.

Around midmorning while Dad slept, the nurses inserted a nasogastric (feeding) tube. My mother and I were constantly amazed at what he could sleep through. He once told us that when he was a teenager in southern California, he slept through the air raids in Los Angeles, but this was ridiculous. When my mother and I left his room for lunch, he pulled out his feeding tube during a nap. He then learned that being awake during the insertion of a feeding tube was rather unpleasant.

During the morning of May 27, I received a text message from a coworker, telling me that my employer was closing our Montreal office. I had developed close relationships to many of those coworkers, and news of their dismissal was startling. My manager contacted me shortly thereafter and told me that she was retiring and that a favorite coworker of mine would be my new manager. Under normal circumstances I might have been more upset about activities and actions at work, but my attention was diverted to my father’s situation.

Addison, a speech and language pathologist with the hospital stopped by and administered a bedside swallow test to Dad, which he failed. Failing the bedside swallow test means that he’s probably silently aspirating anything that he swallows. So instead of strawberry shakes and juices, he’s limited to chopped ice and water, also known as sips and chips. If you’re silently aspirating, small amounts of water are preferable to anything else. On this my first day of swallow education, I learned that your lungs can absorb the water, but anything else that you might aspirate contains bacteria, which can cause aspiration pneumonia. What’s confusing to me is that he passed his initial bedside swallow evaluation on May 20; so, what happened in seven days? Keeping to our typical cadence of alternating good and bad days, today seemed like a bad day.

When we arrived to the hospital on May 28, Dad was hooked up to a dialysis machine. Because he’s in ICU, they used a system that’s much gentler than what you’d find in a dialysis center. Instead of pulling off two liters of fluid in a four-hour session, they pulled off that amount during an eight-hour session. At this time, I didn’t think much about the dialysis. We were told that the dialysis was a temporary treatment that would give his kidneys a break while he recuperated. Had I known that his kidney function was in the toilet, so to speak, I would have been a lot more concerned. On this day he also had a minor procedure whereby they inserted a Vas Cath in his upper right chest. This catheter would be the vascular access that would be used to dialyze him.

Periodically, we had to leave his room for a few minutes while they performed a test or other procedure. During one of those periods when my mother and I were in the ICU waiting room, one of the hospital chaplains asked me if I could act as a witness. I agreed to help, but I hadn’t paid close attention to what she had requested. I quickly learned that she had asked me to witness the signing of an end-of-life directive. I was ushered into the room of a male patient, who actually appeared to be healthier than my father.

The directive terminated all treatment except for that which would keep him comfortable and allow him to die. Because he was unable to sign his name, his wife signed on his behalf. He verbally expressed his intent, and then the chaplain and I signed the document as witnesses. I placed my hand on his wife’s back and she seemed to sag under its weight. As I was leaving the man’s room, he asked me for my name, thanked me for helping him, and wished my father well. I was overcome with sadness for this man who was about to die and for the woman who loved him and who was about to become a widow.

My mother was at a doctor’s appointment when I returned to the waiting room and I kept my emotions in check for the remainder of the day.

Throughout the ordeal that started on May 6, I hadn’t cried. I believed that crying meant that I had given in to defeat and I was determined that we were going to be successful. However, the events of this day broke me, and they had nothing to do with my father.

However, when Stan arrived in Temple late that night, I told him about my day, and I totally lost it for this couple who I had known for less than 10 minutes.

2 thoughts on “Stormy Weather Ahead”