August 20, 2015. As Mom and I drove to the hospital, we realized that today would probably be Dad’s last day at Memorial. We were glad that he had recovered enough to leave Memorial, but we had reservations about the CCH. Except for a couple of cases (good people we had encountered), our feelings about the facility were not positive.

Mom and I arrived at Dad’s room at 7:40 A.M. to find Dad’s legs halfway out of the bed. His nurse, Pam, got him back into bed and then called the doctor about Dad’s delirium. I wiped Dad’s eyes with a warm washcloth, and Pam gave him some Fentanyl, an opioid pain medication, in his feeding tube.

Janie, the respiratory therapist, administered a breathing treatment of Albuterol, followed by oral care. Dad signaled that he wanted the speaking valve now, but he’d been having some difficulty breathing, so he had to remain on CPAP. Janie said that she would move him over to the trach collar around 9:15 A.M. to see how he managed.

Dr. Brett Steven Ambroson stopped by and said that the infectious diseases specialist had recommended a couple of antibiotics for the next few weeks, but added that Dad would probably be on some sort of antibiotic for the rest of his life, or until the antibiotics eventually did no good. Gad. 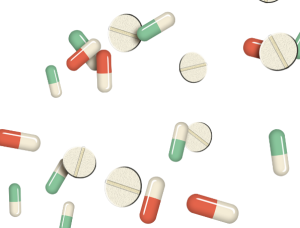 Pam said that she spoke with the doctors about Dad’s delirium, and they wanted to fully vent him at night and had ordered an extra dose of Seroquel for him during the day, along with more Fentanyl. She said that the extra meds were ordered because of Amanda’s claim last night that Dad had hit her. This claim bothered me. It might seem like I was splitting hairs, but Dad had been struggling with the group of nurses to keep from being tied up. During the flailing of his arms, she was struck. He did not deliberately strike her. Mom and I were in the room and we saw what happened, and we didn’t realize that anyone had been hit during the ruckus. It was only when they had finally restrained him that one of the nurses said that he had hit it.

Dr. Stewart stopped by to talk with us about Dad’s situation, including the recommendation to fully vent him at night and then wean him off of the vent so that he could get more rest and get back onto the day schedule for the trach collar. He said that the doctors at Memorial would recommend stopping the Seroquel and replacing it with a pharmacy-grade Melatonin, known as Ramelteon. He said that they had had good results with it at Memorial and hoped that the CCH doctors would want to continue it.

At 10:20 A.M., Michelle, the dietitian, stopped by for a routine visit to see if Dad’s nutritional needs were being met. I had sort of a love/hate relationship with this very nice woman, which had more to do with the tube feed than her. Because Dad had aspirated on his tube feed during dialysis, I asked if he could have the tube feed suspended during dialysis. She wasn’t wild about that suggestion because Dad would be in dialysis for about 12-15 hours each week and the nutritional loss for him could be significant. She said that she would speak with her counterpart at the CCH to devise a nutritional plan for Dad. Since her last routine visit with Dad, he had received about 90% of his daily nutritional goals. As she had done during her previous visit, she also recommended the addition of probiotics and fiber to Dad’s diet.

Dad’s DNR order was not valid outside of the hospital, so Mom had to sign a new one for the ambulance ride from Memorial to the CCH. We didn’t expect anything to go wrong, but it still gave me the willies to sign this document and then send him on his way. We had one final visit with Dr. Ghamande and his team. He pretty much repeated what Dr. Stewart had told us earlier. He also mentioned that Dr. White would be the presiding physician at the CCH next week.

At 11:37 A.M., Janie returned to Dad’s room and moved him back to the trach collar in preparation for his transfer to the CCH. 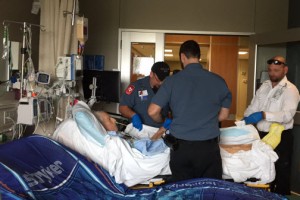 Five minutes later, the EMTs arrived to prepare Dad for the trip back to CCH. Because the cuff was deflated on his trach collar, Dad was able to chat with the EMTs without a speaking valve. He seemed to be in good spirits and didn’t exhibit any agitated behavior. The EMTs’ preparations were finished in less than 30 minutes. As they started pushing Dad’s gurney out of his room, Dawn rushed into the room with Dad’s speaking valve and installed it on his trach.

Mom and I arrived at the CCH at 1:05 P.M. and sat in the waiting room for about 20 minutes before we could go see Dad. When we arrived in Dad’s room, we found him chatting amiably with Dr. Randall Smith, our favorite doctor by far. It seemed as though Dr. Smith was conducting a getting-to-know-you type of interview, but he was actually trying to assess Dad’s cognition. Before he left the room, Dr. Smith said that he was going to request a PT assessment for Dad today and have Speech Therapy get started on swallow therapy. We were so glad that Dr. Smith was the attending physician, if only for three more days. Mom and I finally went home for lunch around 1:15 P.M., and I started working online from home at 1:45 P.M.

Mom returned home from the CCH at 5:15 P.M. During the afternoon, I had inadvertently downloaded a virus from a training website and was now being held captive by one of our IT techs while he tried to fix my computer. I was eventually able to tear myself away from my terribly unproductive day and eat dinner with Mom.

We arrived back at the CCH at 7:05 P.M. Dad seemed to be enjoying his speaking valve and was speaking with a clear and strong voice. In that strong voice, he wished for a pair of tiny scissors that he could use to cut his restraints at night. In my perfect world, he wouldn’t have needed the restraints.

Gary, the respiratory therapist, arrived at 7:45 P.M. and administered Dad’s Albuterol nebulizer treatment and trach care. The treatment lasted for several minutes, during which Dad could not talk. As soon as Gary removed the nebulizer device, Winnie, the night nurse, arrived to administer the evening meds. Within a few minutes, Dad started drifting off to sleep. He had had a full day, full of non-stop talking for the past seven hours. We left the CCH feeling pretty confident that he would have an uneventful night and a good night’s sleep. Dad’s latest stay had gotten off to a pretty good start, and Mom and I were feeling much more optimistic about his return to the CCH.

2 thoughts on “Leaving Memorial again. Back in the CCH again.”